I purchased a bunch of LED's a few years ago with the intention of making LED Christmas lights with them. Here is what they look like: 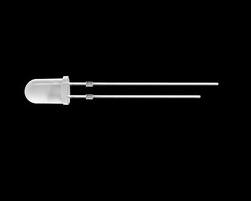 I got lazy and decided I didn't want to do that project. In early May of 2012, I decided that I wanted to do something with those LED's. So I Googled LED projects and found this 8x8x8 LED Cube. I thought it was the coolest project ever so I decided I wanted to try it. Here is how I did it...

How The Cube Works

Each of the layers are connected to a transistor that enables the cube to turn on and off the flow of current through each layer.

By only turning on the transistor for one layer, current from the anode columns can only flow through that layer. The transistors for the other layers are off, and the image outputted on the 64 anode wires are only shown on the selected layer.

As stated in the previous section, the cathode legs of every LED are soldered together to form the layers of the cube. The easiest way to solder the LEDs together is to create a jig. Here is a pic of the first jig I created: 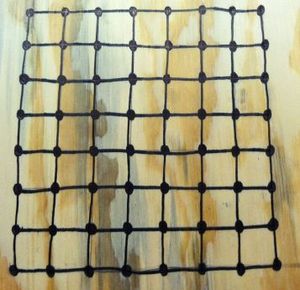 I knew I didn't want to use the LEDs I originally purchased for the Christmas lights because they are really flimsy. So I decided to use them to practice my soldering skills which would also allow me to figure out how the cube works. I started with a 5x5x5 cube.

I started soldering the cathode legs together. 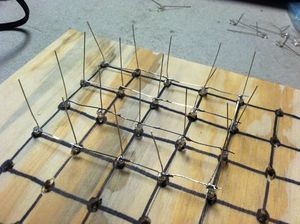 I then soldered a piece of wire across the cathode leg of the LEDs to add support. 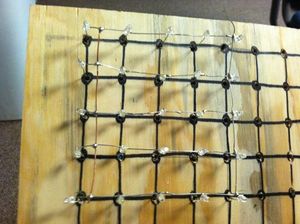 Once I got 1 layer done, I created another layer so I could figure out how to solder the anode layers together. I used an alligator clip to keep the LED leg where I wanted it. 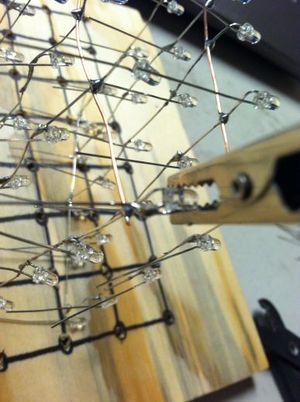 Once I got the anode legs soldered together, I had a 5x5x2 LED Cube. 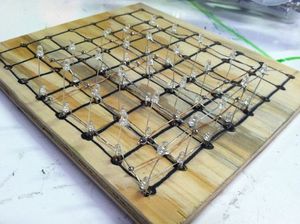 I stopped at this point because I had a pretty good understanding of how to create the cube.

At this point I ran out of the White LED's. Luckily, one of our members Scott bought out one of the electronic stores here in Huntsville...so he had some LED's to spare. 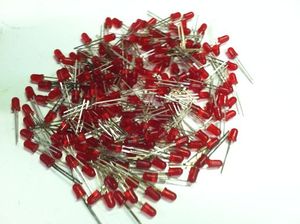 These LED's were much larger that the LED's I originally started out with. So now that I had larger LED's, I needed a jig that could support these larger LED's. So Scott created a new jig in Inkscape. This new jig ended up adding extra support to the cube. We used acrylic for the new cube and used the Laser Cutter to create the jig. Below is the .svg file we used to create the jig. You can right click on the .svg file to save it and create a jig for yourself if you would like to attempt this project. 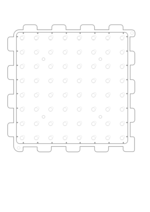 The top piece is placed on top of the bottom piece making sure the holes line up. Screws and nuts were then placed in the 4 holes that are around the middle of the jig.

Wrapping Wire Around The Jig

Like I said in the previous section, this jig adds extra support to the cube because of the criss cross like way the wire is wrapped around the jig.

To start wrapping the jig, place the end of a long piece of wire around the top left hole of the bottom piece of the jig. Around the wire around tab a couple of times. 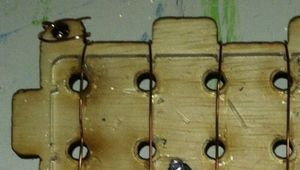 Etching the Driver Board 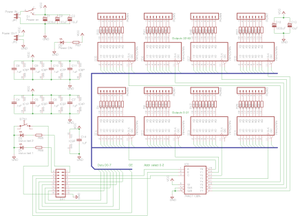 I soldered the IC socket's for the 74HC574N IC's and the 74ACT138N IC on a prototype pcb board. I started making the connections for pins 1-11 of the 74HC574N IC. I thought I was supposed to solder pins 1-11 of each IC together and then solder those pins into something else. I didn't know what that something else was but I was going to figure it out later. I quickly learned I was wrong.

I asked Scott if I was wiring the board up correctly and I was quickly shot down. Scott explained to me what a bus was. I learned that it would have taking a lot of wire to accomplish creating a bus with 8 IC's. So Scott suggested we etch the driver board. This turned into a 3 day ordeal.

Here's the process of etching the board:

The first thing we had to do was look a the schematic for the driver board from the instructables site. Scott quickly realized that the schematic was created from eagle, an application to create pcb's. We copied the schematic off of the instructables site and imported it into eagle. We were limited to a space of 4" by 3". So we had to rearrange the IC's and resistors to fit in this space. In about 6 hours of editing, we had a board ready to be printed and etched. This board would have a top layer and a bottom layer.

But before we could print the board, we needed to create the holes for the components. The laser cutter can't cut copper clad boards. So we came up with the next great idea. We imported just the holes of the board into Inkscape and created a jig for drilling holes in the copper clad board. 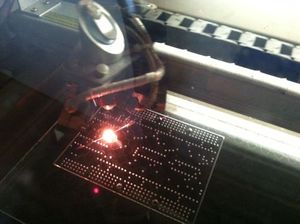 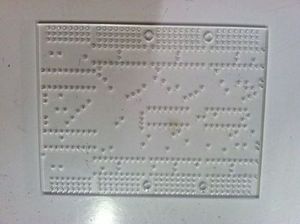 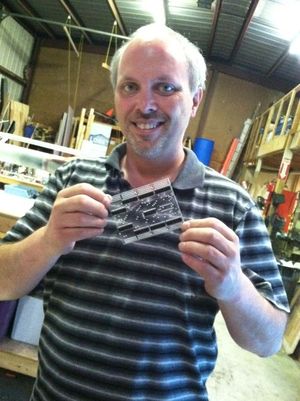 Scott with his creation 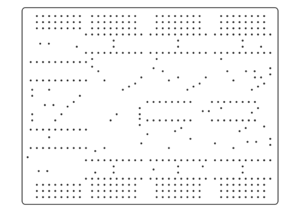 Now that we had to jig for putting the holes in the copper clad board, we had to drill the holes. 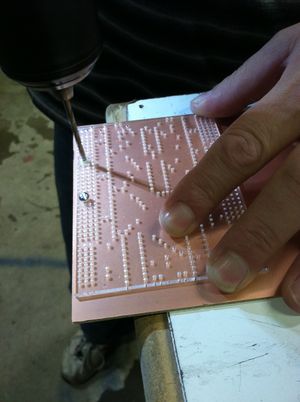 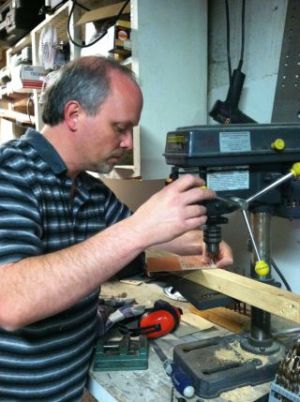 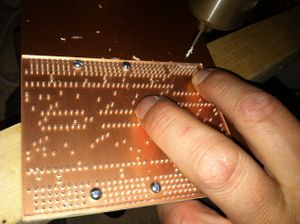 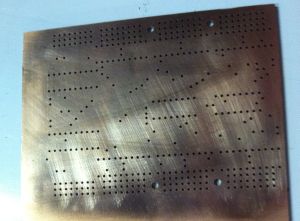 After being scrapped with steel wool

Now we were ready to place the circuit on the board. We exported our schematic to a .bmp file so we could save it to a .doc file to be printed. We had to make a negative of the top layer in order for it to be etched properly. We used Toner Transfer paper from Digi-Key. We got the document printed at Staples for less than 30 cents. The document had to be printed on a laser printer on the shiny side of the transfer paper otherwise the transfer wouldn't work. 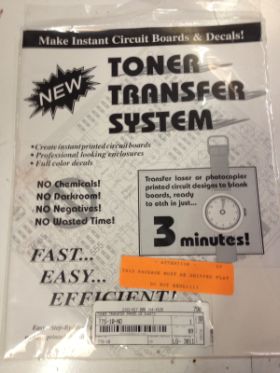 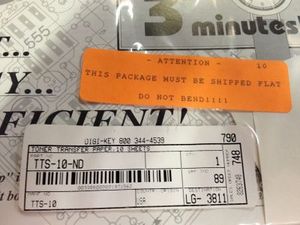 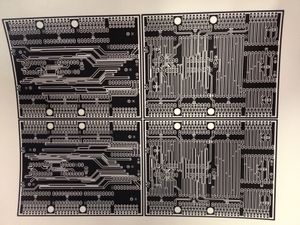 Circuit to be etched 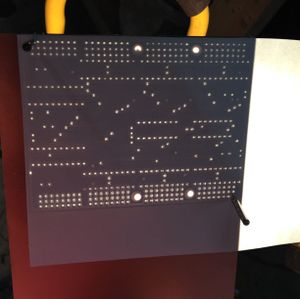 Transfer paper lined up with holes in the copper clad board

Both layers have transfer paper 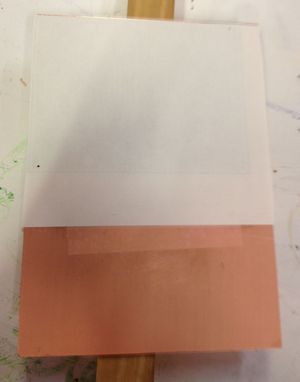 Tape on outside of transfer paper and copper clad board

Now we were ready to laminate the transfer paper onto the copper clad board. 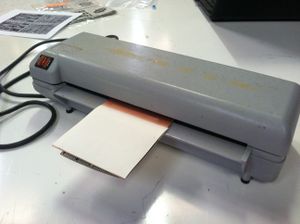 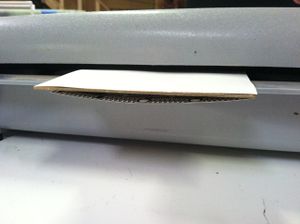 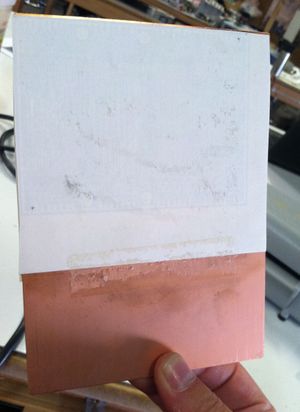 Copper Clad Board Being Placed in Water

Finger Print on the Copper Clad Board

So now that the circuit had a finger print on it, the board had to be redone. So we took steel wool to the copper clad board and started over again :(

We thought that this was going to be an easy process. Boy were we wrong. It took us 5 more times to get a board that we were satisfied with. Here is what we learned and the problems we had:

1.) A finger print was left on copper clad board...see the video above 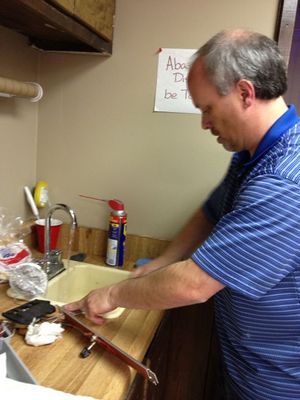 4.) Now we had a clean laminator! :) But we used all of our transfer paper with the circuit printed on it. Staples was closed. So we had to go to the next best thing...Kinko's...which was open 24 hours. We ended up re-doing the circuit to minimize on the amount of traces. There was a problem with Kinko's toner. It sucks!! The traces came off during the soaking in water process. Forcing us to do it for a 5th time. 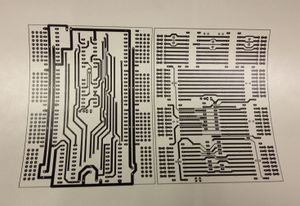 One day, Caleb Kraft, from Hack A Day decided to visit the shop. I happened to be working on my cube when he came. So he asked me a few questions about the cube. Here is the link: