Cordova is the current code name for a two person quadrotorcraft with an estimated lifting capacity of 500lbs. This should be enough power for two people plus some stuff. There will be four rotors, one on each corner of the craft. The seats will be back to back so the two passengers can see everything around them. The rotors will be powered by electric motors, but there will be a diesel generator to provide power to the motors and a backup battery for emergency landings and to maintain flight control in the event of power loss. The choice of diesel is mostly because of energy density when compared to batteries. We don't plan to fly this very high.

Motors: The cross shape is aligned along the pitch and roll axes. Motors are M1 through M4 with M1 at the front of the aircraft and M2, M3, and M4 arranged clockwise from the front. M1 and M3 spin clockwise while M2 and M4 spin counter clockwise.

This is the channel aluminum frame before adding motors or electronics.

The frame after mounting new motors.

The assembled unit minus xbee and Razor IMU. 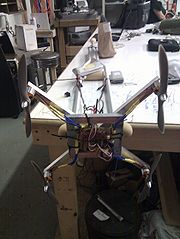 The nearly complete unit in a testing jig.

The PoC will be created using standard model aircraft speed controllers, motors, and propellers. It will be battery powered and have a IMU for stabilization.

exclusively remote control, direct control input, mixing of controls based on equations above in the microprocessor

Add the IMU to the system.

The atmel will take in raw input channels and mix them according to the equations above like before, but will correct pitch, roll, and overall thrust based on gyro data.

Add a GPS to the system for location. Real time control via simple instructions.

Loss of signal results in unit moving back to the location where it powered on unless explicitly told not to.