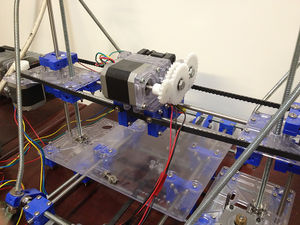 The SeeMeCNC H-1 3D printer is a thermoplastic extrusion-based rapid-prototyping machine modeled after the RepRap Huxley, which means it has a slightly smaller build area than the RepRap Mendel, but it can still get a lot done. The unique characteristic of the H-1 is that the parts are not printed (like most RepRap parts), but instead were created by using an injection-mold process, similar to the process LEGO uses to make its bricks and pieces. This means that once the molds were made for each of the pieces, the pieces are cheaper and quicker to fabricate. SeeMeCNC started up their project on IndieGoGo (similar to KickStarter), and requested donations to cover the costs of making the molds and designs. I made a donation of $100, which included the perk of receiving a complete set of H-1 plastic parts and hardware so that a full machine could be built, without the stepper motors or electronics.

16:38, 2 June 2013 (CDT): After a long hiatus, I'm starting the project back up again. So far, the printer is assembled and wired up, and is working with a few different host software applications. Extrusion has been mostly successful, but a few tweaks are needed. We're still looking into the best firmware/software combination to run the machine.