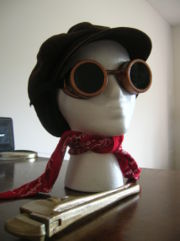 The steampunk repaint project was mostly a way of practicing painting and Dremel work. I took ordinary objects and "spiced up the paint job. I started with a pair of brazing goggles. First I sanded the outside slightly so that the base coat of paint had something to grip to. I used a Krylon black spraypaint that was formulated for plastics. After applying and even coat, I let it dry for several hours. I then applied a coat of brass colored spraypaint.

The base object for the gun was a Nerf toy. I used the Dremel tool to sand off any logos. I also opened the gun and cut away some guards to allow the magazine to swing out further. Just like the goggles I sanded the surface lightly and applied the black base coat. I used model paints for the final coat rather than spraypaint.

The wrench was much simpler. All I did was applied a a couple coats of the brass paint without any need for a base coat.

The gun and the goggles were given a final coat of Future Shine wax. This can be found in many floor waxes. This protects the paint and adds a bright gloss. In the case of the gun it also allowed the moving parts to slip past each other more easily.