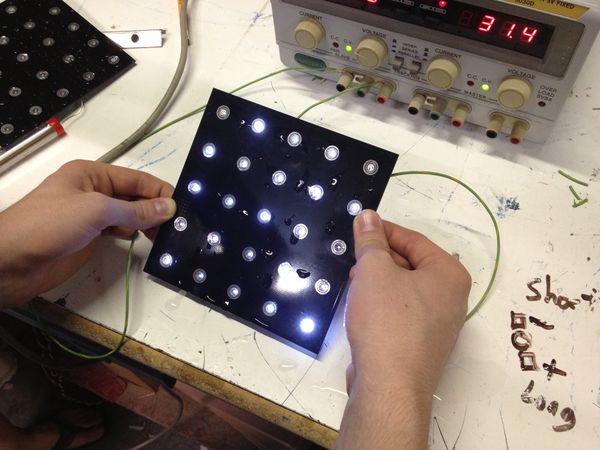 Version v0.1 prototype of a smaller version of one of the panels.

A board member of Huntsville's Downtown 47 and a member of their investment committee approached us on May 28th, 2013 with an interesting proposition. They are "interested in a project to build a wall covered with LED lights that illuminate when the diodes come in contact with water. Our intent is to place the wall in Big Spring Park as a 'water graffiti' exhibit". Similar projects were undertaken by Antonin Fourneau in Poitiers, France (video) and by Jae Min Lee in South Korea (link).

Some measurements were made on the v0.1 prototype boards (with the eBay LEDs), and it was found that each 25-LED board would draw up to 25mA at 7V for a total of 175mW.

In order to estimate the full time-scope of the project, we'll be measuring the amount of time required to assemble prototypes and early boards. This should give us a reasonable estimate for the total number of person-hours required to complete the project, so we can provide a more accurate completion date. 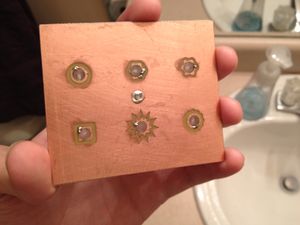 This 5"x3" 6-LED prototype was made completely in-house. The single-sided PCB was created using an etch-resist mask cut by the vinyl cutter, and the holes were drilled with the drill press. Six blue LEDs and two 3V coin-cell batteries were used to populate the board.

Cost: $0 (used materials that were on-hand)

This prototype will consist of 10 6"x6" double-sided PCBs with black soldermask and solder-tinned pads. This prototype will give a better feel for the finished product, and can be used as a sample/demonstration to show off to others. Features that we'd like to see in this prototype are inter-connectivity*, water resistance, and overall aesthetics. This prototype will also help provide a better estimate for the time required to assemble the boards by hand. I'm going to try to work in some sort of music controller as well, using parts I have on-hand.

* Easy inter-connections were not included in this version.

The wall will consist of many interconnected LED PCB boards that contain built-in water sensors. This team will handle designing and manufacturing these PCB boards.

The wall will require a moderately hefty power supply system to power all of the LEDs and a way to get this power to the boards. We also need to ensure that the system is safe, since we're dealing with water and electricity. This team will need to choose a power supply (or multiple supplies), and determine the best way to route power safely from the supply to the LED boards.

Building the physical wall using the PCBs is non-trivial and will need some careful design and thought. This team will help decide on materials and structural components, and will help build the wall's physical supports.

Some "bonus" ideas have been floating around to give the wall more unique and amazing features. The idea of adding some sort of sound output from the wall is the proposed feature with the most attention at the moment. This team will design hardware and software that will receive input from the wall and produce some sort of auxiliary output on a laptop, mobile device, speakers, etc.

Once the PCBs are made and shipped, they will need to be assembled. The wall may exhibit over 15,000 LEDs so as many hands as possible will be needed to solder them all onto the boards. This team will assemble the final PCBs by soldering LEDs to each board and test the completed boards.

One of the main goals of the project is to show off what Makers Local 256 is capable of doing. We'll need photos, videos, write-ups, and general documentation of the process to record our progress and successes. This team will be in charge of taking photos and videos of soldering events, wall construction, prototype assembly, circuit testing, and pretty much any other aspect of the project.

If you don't know what to do, add yourself here, and we can help you find something!

00:56, 11 June 2013 (CDT): Started the wiki page with some PCB cost information. We have also created a small sample prototype to prove the viability of the overall idea. The prototype worked very well, and it seems that the water-sensor shape does not really have much effect on the LED brightness or conductivity of the water.

13:58, 19 June 2013 (CDT): We demonstrated the board and got some great feedback and ideas. We were given the go-ahead to draw up a design for more "finished" prototype in order to give a better feel for the final product and the time it will require to build it. One possibly feasible idea that merits investigation is using the same water pads to control a MIDI (or similar) instrument when water hits the pads.

12:44, 15 July 2013 (CDT): Prototype v0.1 PCB design has been completed and sent off to the fab house, and we're awaiting its completion. All of the parts for this prototype have arrived, except the PCB, so assembly of the prototype will begin when the boards arrive.

10:48, 24 July 2013 (CDT): Prototype v0.1 PCBs arrived and we began assembling and testing a few of the boards. We assembled two boards, one with the eBay LEDs as purchased, and one with the eBay LEDs sanded down for diffusion. Both boards were tested on a power supply, and all of the connections and sensors worked very well. We also timed various assembly steps in order to help estimate the overall assembly time of the wall.

21:20, 28 July 2013 (CDT): Two more boards were assembled, with both types of Cree LEDs. There is no noticeable light output difference between the Cree LEDs and the LEDs from eBay. Some wires were also soldered to the boards to allow for easy demonstrations.