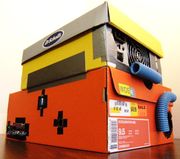 He has interests in:

Years ago, ctag would visit the local thrift store with a screwdriver and buy parts from rejected computers. Eventually he built a working computer that was housed in two shoeboxes (pictured above). In middle school, a teacher and mentor of ctag provided him computer parts to redesign his computer and make it more suitable as a machine to do schoolwork on. Along the way, he learned how to solder while making LED lights for his new computer, and assembled his first soldering kit in 2009. At high school in 2010 ctag was introduced to welding; empowered by the prospect of fabrication, he purchased his own welding kit and built a tandem bicycle over his 12th grade summer. In 2012 ctag opened his first TOR node to learn more about the network, and now operates a relay and I2P node when resources permit. The next year, 2013, he made a financial decision to not purchase a new Windows license, and instead migrated entirely to Linux/BSD operating systems. While ctag is still splashing around in the wade pool of libre software, he has a vested interest in learning as much as possible about operating systems and the dream of one day writing his own. 2014 was predominantly consumed by a project to build Slodac, a 5V laptop. The device didn't pan out due to limitations of time and batteries, but the project brought a new appreciation for the engineering and design that goes into electronics.

While in middle school, a friend who was also named Christopher and myself participated in a student review course where we tried to help schools determine the role of technology in the classroom. Part of the course involved online chat sessions. The other Chris named his account [Chris The Genias] and I played along to create [Chris The Anti Genius].

A collection of cyberpunk movies